A farm for the future

This programme seems to be recieving a lot of positive reviews on the net so i'm downloading it at the mo. It caught my eye as it mentioned forest gardening which is a passion of mine at the moment (will be posting links to some great videos on this soon)

Wildlife film maker Rebecca Hosking investigates how to transform her family's farm in Devon into a low energy farm for the future, and discovers that nature holds the key.

With her father close to retirement, Rebecca returns to her family's wildlife-friendly farm in Devon, to become the next generation to farm the land. But last year's high fuel prices were a wake-up call for Rebecca. Realising that all food production in the UK is completely dependent on abundant cheap fossil fuel, particularly oil, she sets out to discover just how secure this oil supply is.

Alarmed by the answers, she explores ways of farming without using fossil fuel. With the help of pioneering farmers and growers, Rebecca learns that it is actually nature that holds the key to farming in a low-energy future.

The following quote is from HERE

It offered a powerful combination of looking back and looking forward, underpinned all the time by her clear deep affection she has for the farm itself. and the deep respect she has for both her father and his work. It was surprisingly personal and moving. For me, the proof of this programme was a visit yesterday from my father in law, not usually one to be interested in such things, who had seen the programme, loved it, and told me excitedly that he now knew that hedgerows could be productive, and that fossil fuels are running out. He was very impressed with the agroforestry side of things, and I suspect that many people also watched it and found themselves similarly having Eureka moments as regards some of the insights about soil, ecosystems and the idea that food production need not necessarily involve huge tractors and lashings of diesel. It was also very powerful for people to start to realise that food production and biodiversity are not necessarily, as is often believed, mutually exclusive

You can still watch this on the BBC site but only for a limited time so here are a couple of torrent links to download it.

DEMONOID 185MB .MOV
MININOVA 571MB .AVI
You can watch a short clip HERE (Trivia- I think the refinary in the background is Milford Haven in Pembrokeshire where the worlds biggest LNG plant operates) 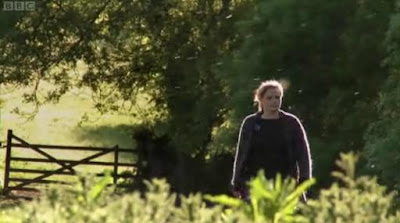 Sorry but i watched this and found it to be mostly a pile of crap.

First of it’s presented by some anoying female who as it turns out is the usual London career type who then decides to head out to country (i know she was from there anyway but she still acts like all the others).

She then starts bleating on about oil and how it effects farmers and all the doom and gloom that comes with it, fair enough but i got the impression she was telling herself that more than telling us as if she was just learning this herself and what little knowledge she does tell is hardly unkown anyway (unless you lived in the London bubble for years).

Now to the worst part of all. She sets up a so called live internet conversation with a bloke in the USA (remarkable image clarity and streaming they get down in Devon) which saves us TV licence payers the cost of her flying out there BUT after moaning about the fuel crisis she then jumps into her Land rover (not the most fuel effecient motor) then drives from Devon to SW Wales then onto a ferry (she doesnt say but i’m certain they dont use sails or oars) then drives to some point in Ireland to chat to some bloke for 2 minutes. Then on the ferry on the way back she’s moaning about the resources that went into the sandwich she just bought, it was at this point that i was going to switch off, she is a complete idiot and treating us the same.

But i held out as I have a strong passionate interest in forest gardening and permaculture. It’s only after she returns from Ireland that it finaly gets interesting, it wasnt very indepth but it was good to see her taking it seriously (in her own wishy washy way) but more importantly it was good to see more exposure for this subject.
It did make me wonder if she was going to do something similar herself on her dad’s farm which i hope she does, maybe a follow up episode but without all the nonsense.