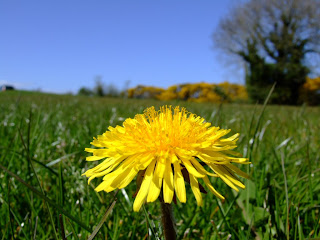 To a Dandelion.
Blessings on thy sunny face,
In my heart thou hast a place,
Humble Dandelion!
Forms more lovely are around thee,
Purple violets surround thee,--
But I know thy honest heart
Never felt a moment's smart
At another's good or beauty,--
Ever at thy post of duty,
Smiling on the great and small,
Rich and poor, and wishing all
Health, and happiness, and pleasure,
Oh, thou art a golden treasure!

I remember years ago,
How I longed to see thee blow,
Humble Dandelion!
Through the meadows I would wander,
O'er the verdant pastures yonder,
Filling hands and filling lap,
Till the teacher's rap, rap, rap,
Sounding on the window sash
Dreadful as a thunder crash,
Galled me from my world ideal
To a world how sad and real,--
From a laughing sky and brook
To a dull old spelling-book;
Then with treasures hid securely,
To my seat I crept demurely.

Childhood's careless days are o'er,
Happy school days come no more,
Humble Dandelion!
Through a desert I am walking,
Hope eluding, pleasure mocking,
Every earthly fountain dry,
Yet when thou didst meet mine eye,
Something like a beam of gladness
Did illuminate my sadness,
And I hail thee as a friend
Come a holiday to spend
By the couch of pain and anguish.
Where I suffer, moan and languish.

When at length I sink to rest,
And the turf is on my breast,
Humble Dandelion!
Wilt thou when the morning breaketh,
And the balmy spring awaketh,
Bud and blossom at a breath
From the icy arms of death,
Wilt thou smile upon my tomb?
Drawing beauty from the gloom,
Making life less dark and weary,
Making death itself less dreary,
Whispering in a gentle tone
To the mourner sad and lone,
Of a spring-time when the sleeper
Will arise to bless the weeper? 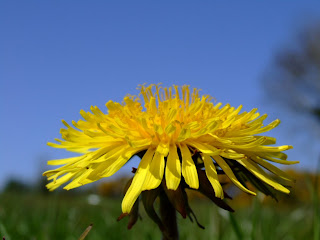 I have never before boiled dandelion greens. They smelled surprisingly like spinach while boiling and completely lost their bitterness in the process. They were so delicious on their own as a boiled green that I plan to continue harvesting them with vigor for what remains of the growing season and eating them as-is with a dash of salt and sprinkle of oil.

If you are ever in Greece, you will see that bakeries offer Hortopita (Greens Pie) much more often than the famous Spanakopita (Spinach Pie). I think this gives them the flexibility to use whatever greens are available, including spinach no matter what the season.

Preheat the oven to 325ºF. Bring 1 quart of water to the boil. Add the greens in bunches. Cover the pot and bring back to the boil. Cook until tender (3-4 minutes ). Drain and as soon as the greens are cool enough to handle, squeeze as much water out of them as possible. A lot of moisture in the horta filling will make the bottom of the pie soggy. Place them in a large bowl. Heat 1 tbsp of oil in a large frying pan and add the onion. Once the onion is transparent, add the leeks and cook until everything is completely wilted. Add this to the spinach. Add salt and pepper to taste. Crumble the feta between your fingers and add it to the vegetables. Mix everything.

Set up your work station with the 1/2 cup of oil, a pastry brush, a large, ovenproof dish (any shape or material) and the unrolled filo. Cover the filo sheets with plastic wrap to keep them from drying out. Brush the dish with a thin but even layer of oil. Brush a small amount of oil on the first sheet and lay it in the dish irregularly, with an angle sticking out of the dish. Proceed with the next oiled sheet and lay it with an angle sticking in another direction. Continue this way until you have used up 2/3 of the sheets and they are arranged with edges overhanging on all sides of the dish. Why? **See Below.

Place the horta filling in and spread evenly. Cover with more oiled sheets, this time folding over any and all corners and fitting them into the shape of the dish rather than letting them hang over the sides. Once you've used all the filo sheets, fold the uneven edges back on top of the pie and brush with more oil. This will make a shiny, brown finish once the pie is baked. Prick pie with a fork in several places to keep it from ballooning in the oven.

Bake for 30-45 minutes or until the top is a nice golden brown with darker brown edges of some of the top pieces. Remove it from the oven, and let set for 30 minutes before cutting into squares.

** Just before you put this into the oven, you will fold these edges back on top of the pie to make a beautiful effect like crinkled-gift-wrapping. This also helps hide mistakes. Any broken filo dough, no problem, just layer it along with everything else and nobody will know!

Some traditional options: You may add up to 1/2 cup of fresh dill and/or parsley and/or up to 5 eggs to the horta filling.

Other options: Your choices of what else to add are limited only by your imagination. Some Greeks make this type of dish with any leftover vegetable.

Herbal Help for Humans and their Companions

The nervous system can take a battering at Christmas. This is a time of year that can be very stressful and difficult socially, travel wise and also financially.

When suffering from anxiety, depression or feeling tight and stressed you need to consciously focus more on "Blissors not stressors", address each one of the following areas to achieve a more balanced and happy life. Ultimately we have to remember to nourish all our senses. Creative activities and nature walks are some of the best ways to achieve this. Look at:-

Dandelions have a thick tap root, dark brown, almost black on the outside though white and milky within, the long jagged leaves rise directly, radiating from it to form a rosette lying close upon the ground. The leaves are shiny and without hairs, the margin of each leaf cut into great jagged teeth, either upright or pointing somewhat backwards. All parts of the plant contain a somewhat bitter, milky juice (latex), but the juice of the root being still more powerful is the part of the plant most used for medicinal purposes.

Young Dandelion leaves make delicious sandwiches, the tender leaves being laid between slices of bread and butter and sprinkled with salt. The addition of a little lemon-juice and pepper varies the flavour. The leaves should always be torn to pieces, rather than cut, in order to keep the flavour.

The dried Dandelion leaves are also employed as an ingredient in many digestive or diet drinks and herb beers.

Dandelion Coffee is a natural beverage without any of the injurious effects that ordinary tea and coffee have on the nerves and digestive organs. It exercises a stimulating influence over the whole system, helping the liver and kidneys to do their work and keeping the bowels in a healthy condition, so that it offers great advantages to dyspeptics and does not cause wakefulness.

Dandelion is very nourishing and high in vitamin A. It is a blood, kidney, and liver cleanser and tonic. Dandelion is useful as a diuretic and one of the best natural sources of potassium. This makes it an ideal balanced diuretic even with oedema related to cardiac conditions. Its cholagogue action makes it an ideal remedy for inflammation and congestion of the liver and gallbladder. Dandelion root has a significant cleansing action on the liver and stimulates bile production. It is also mildly bitter and a gentle laxative.

Dandelion's bitter taste stimulates bitter receptors in the mouth and by reflex activates the entire digestive tract and the liver. It increases the flow of digestive juices thereby improving digestion and assimilation and enhancing the appetite. Dandelion cleanses the liver by increasing bile production and flow through the liver. Thus giving support to the liver's work as the major detoxifying organ in the body.

Dandelion root is one of the best detoxifying herbs. As is works on the liver and gallbladder to help convert waste products it also assists the kidneys to remove the toxins through urination.

Pick and eat a young leaf as you walk past - each time!

Ask your relatives if they have any experiences with the Dandelion. Remember that it originally came from Asia where it played an important role in both food and medicine. Arabian physicians, even before the year 1000, used this plant as a medicine. The Dandelion has not established itself in the wild in the Southern Hemisphere. Dandelions made their recorded appearances in Canada with the French in the 1700’s where it was used in salads and as a health remedy.

This plant also appeared in New Mexico, USA when Spanish people brought it over for a medicine and food source, they called it chicoria. Germans brought the plant to Pennsylvania in the 1850’s and used it as an early spring infusion of nutrition and vitamins. The English also brought the plants over to cure liver problems and other illnesses. Native Americans soon started to see benefits from the plants and started to grow them for the same uses as others. The plant is grown in India and is used mainly for a remedy for liver problems. Most recently the dandelion root is being grown and exported to Russia for use in medical remedies.

The word Dandelion comes from the French name for the plant dents de lion. This means teeth of the lion and refers to the jagged edges of the leaf of the plant.

The other French name for this plant is pis-en-lit, in English this means wet the bed. Dandelions deserve this name because their greens, when eaten, remove water from the body. So eating the greens could cause someone to well… you can guess the rest. Not recommend for a bedtime snack.

The dandelion first came from Asia but it now calls the entire planet home!

Each year fifty-five tones of coffee substitutes made from roasted Dandelion roots are sold in England, Australia and Canada.

The Dandelion provides an important food source to bees. The pollen from this plant helps bees out in the spring because it flowers early and the flowers continue through to the fall providing constant food. In fact no less then 93 different kinds of insects use Dandelion pollen as food.

The Dandelion seeds are important food to many small birds.

In Flanders fields the poppies blow
Between the crosses, row on row,
That mark our place; and in the sky
The larks, still bravely singing, fly
Scarce heard amid the guns below.

We are the Dead. Short days ago
We lived, felt dawn, saw sunset glow,

Loved and were loved, and now we lie
In Flanders fields.

Take up our quarrel with the foe:
To you from failing hands we throw
The torch; be yours to hold it high.
If ye break faith with us who die
We shall not sleep, though poppies grow
In Flanders fields

Newer Posts Older Posts Home
Subscribe to: Posts (Atom)
"He who knows the most, he who knows what sweets and virtues are in the ground, the waters, the plants, the Heavens and how to come at these enchantments, is the rich and royal Man." - Emmerson